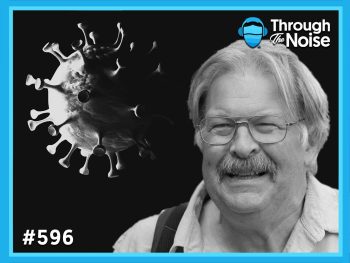 Daniel Brooks is a professor emeritus at the University of Toronto, a fellow of the Royal Society of Canada and the Linnean Society of London, and a Research Fellow of the Manter Laboratory of Parasitology, University of Nebraska State Museum. He has been working for the past decade as a free-lance consultant on the evolutionary biology of climate change and emerging disease. He is also an author of The Stockholm Paradigm, which we discussed in his first episode, during the beginning of the coronavirus lockdown. In his second episode, we discussed the COVID-19 vaccine.

The crisis of emerging disease has been a century and a half in the making. Human, veterinary and crop health practitioners convinced themselves that disease could be controlled by medicating the sick, vaccinating those at risk, and eradicating the parts of the biosphere responsible for disease transmission. Most climate scientists made no connection between climate changes and disease. Evolutionary biologists assured themselves that coevolution between pathogens and hosts provided a firewall against disease emergence by pathogens moving to new hosts. None of those traditional perspectives anticipated the onslaught of emerging infectious diseases confronting humanity. A new understanding of the evolution of pathogen-host systems, called the Stockholm Paradigm, explains what is happening. The planet is a minefield of pathogens with pre-existing capacity to infect susceptible but unexposed hosts, needing only the opportunity to come into contact with them. Climate change has always been the major catalyst for such new opportunities, through disrupting local ecosystem structure and allowing pathogens and hosts to move to new ecosystems. Once pathogens expand to new hosts, novel pathogen variants may emerge, each with new capacities to infect hosts. Mathematical models and real-world examples uniformly support the conceptual framework. Emerging disease is thus one of the climate change-related threat multipliers confronting humanity. The universe of risk is thus enormous and climate change is the trigger – time is short, danger is great, we are unprepared. Even without deadly global catastrophes of the scale of the 1918 Spanish Influenza pandemic, emerging diseases cost humanity more than a trillion dollars per year in treatment and lost productivity. The Stockholm Paradigm also offers hope. Embodied in the DAMA (document, assess, monitor, act) protocol, we can “anticipate to mitigate” emerging disease, buying time and saving money while we search for more effective ways to cope with this challenge.